In a world where high-end amps meet affordability, we spill our guts out on the Schitt Vidar review.

There’s nothing better than that sound of a high-end power amplifier hooked up to your favorite loudspeakers to enjoy a movie night, gaming day or just music in the air tonight. However, the grass isn’t always greener on the other side, which is why we want to show you the good, the bad and the ugly on the Schitt Vidar Intelligent Stereo / Mono Power Amplifier!

Coming in at $699 and a California based manufacturer, what Schitt promises you is an ultra-high-end amplifier, without the ultra-high-end price. Although there are some excellent features, which we want to highlight, we will lay it all on the line where you can decide to either go with the Vidar or some great alternatives. We Love the Look, Feel and Design

If you already decided on purchasing this product, use the button below to go to Schiits website to order. With that said, we urge you to keep reading because we break down what’s great and what’s not about the Vidar. There’s also some REAL NICE alternatives that you can choose from, with amazing reviews and potentially an overall better bang for your buck.

If you don’t know much about audio equipment, buying a power amp is just the beginning expense. You will obviously need a good set of speakers to hook up, the right cables, and if you want to up the ante, you should get a pre amp. So, all together you could be looking at spending a little over $1,000, which most audiophiles would agree that just over $1,000 is a bargain for a 2 channel, class AB power amp.

Reviewing the Features of the Schiit Vidar Power Amplifier

The Vidar is a simple-looking all metal box power amp that has some ultra-high end features. First and foremost, power output and amplification type are the most important things about power amps. This product delivers class AB instead of class D. A/B amplification is preferred by most high-tech audiophiles because it produces cleaner sound and less distortion. 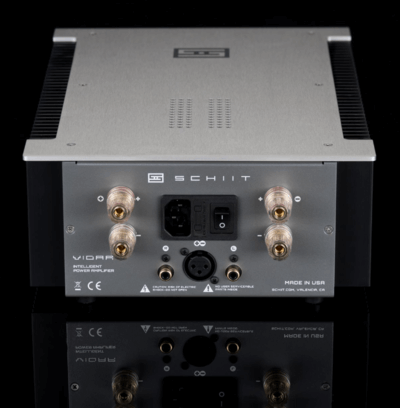 How Much Power Does it Possess?

There is no active cooling system, but all the produced heat is handled at the front and top panels. Obviously we would all love if it had a cooling system so it wouldn’t get so hot. On the flip side, without the cooling system, the power amp is much more efficient, and doesn’t produce the extra fan noise.

If you’re looking to save the environment, the vidar is NOT for you, as it will stay turned on as long as its plugged in. On a side note, these power amps are very eco-friendly. Going back to the vidar, there is no standby or auto-standby. Most class AB amps have auto-standby or standby buttons, but not the vidar.

After analyzing hundreds of customer reviews, we came up with a list of pros and cons. Check them out!

While we think the vidar is a great value for the money and the features, our mission is to help you choose what fits your room best. For that reason, we want to show you a few schiit vidar alternatives, which will help make your decision much easier.

What Are the Best Alternatives?

There are some great alternative power amps that have most, if not more of the same specs. At $699 price point, it’s not easy to find grade AB amplification with the same kind of performance, manufacturing and expandability.

If you have a little bit bigger budget, there’s more options. If money isn’t an issue, your choices will increase significantly. With that being said, there are two power amps that are a step up in technology and sound, and they are the Emotiva XPA-2 Gen 3 and the Monoprice Monolith 2x. Check out the table below to get a better feel for the features and why they may be a better fit for your audio needs.

This power amp is priced very similarly and it offers just as much, if not more value just like we mentioned in the schiit vidar review. The features include both RCA and XLR inputs, DC trigger input / output, flasher input, 4-way posts and a remote control connector. The Marantz MM7025 has a power button, unlike the Vidar, which is eco-friendly, and flat out a better feature. On a friendly note, the manual says it’s not recommended to use this amp with 4 ohms speakers, so keep that in mind before buying.

Another A/B power amp is the Parasound 2125v2, which is also a two-channel THX Ultra 2 power amplifier. Produces 150 watts per channel into an 8 ohms. The design is sleek and has a gold plated RCA input jacks and loop output jacks. Again, there is a standby mechanism (unlike the Vidar), channel status and heat indicators. The price is very similar, depending on the time of the year. Worst case you’re spending an extra $100, which isn’t bad at all.

What a beautiful, powerful, amazing two-channel, 1350W at 4Ω POWER amplifier! We get excited just talking about his beauty mainly because of the affordability and the terrific quality sound you’ll get. In our Klipsch RP-280F review, we mentioned that this amp is a phenomenal duo. The price point is very similar to the Vidar and has some serious features that any audiophile would be extremely proud of. Like the Schiit vidar, it has a balanced XLR and RCA inputs and binding post and speak on outputs. There is also an efficient forces air-cooling mechanism, which prevents excessive thermal buildup.

This power amp is a little more pricey, but has some really amazing features. In addition to the features, it’s a power amplifier just over $1,000.

Almost exactly the same as the Vidar, Emotiva’s XPA-2 features 5-way gold-plated speaker binding posts as well as balanced XLR and RCA inputs. Again, another class A/B amplification, but this bad boy has a class H power supply, which helps improve efficiency and gives clearer sound. Check out the customer reviews, they say it all: This is another amp that is a little over $1000, but is every bit as powerful and terrific as the Vidar. Monoprice is also designed and engineered in the US, which is nice to know. The look and feel of the Monolith Multi-Channel is stunning, beautiful and every bit of elegant.

The features include both balanced XLR and unbalanced RCA inputs, 5 way binding posts, chassis ground and DC trigger input. There is a standby button (upgrade from Vidar) on the front panel and can be put on standby when you aren’t using it. This amp delivers the best in music and movie soundtracks that we all deserve to hear.

Is the Schiit Vidar the best power amp on the market today? Absolutely not. However, it is very good and it is made in the US. The problem that we have with it is it isn’t very eco friendly, causing it to not last as long as it should. There’s also the fact that you need to stack it up heavily with the correct pre-amp to get more juice out of it. We analyzed hundreds of reviews by customers and we believe it is better to go with one of the alternatives we suggested.